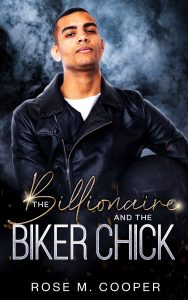 Reece let his gaze sweep over her again, and goose bumps spread over her skin everywhere his gaze landed.

Crissie refrained from laughing. She just winked and grabbed a shocking pink highball glass. Crissie quickly assembled the drink in the cocktail shaker, adding in the vodka, peach schnapps, and orange juice.

Reece kept his eyes locked on her as she vigorously shook the cocktail shaker, poured the drink into the glass, and topped it off with cranberry juice. Crissie placed a cherry on top of the drink and slid it over to Reece.

He stared at her, puzzled as the glass stood between them. Crissie leaned forward and gave him a good view of her cleavage as she reached over and took the cherry by the stem, making sure to not touch the liquid contents of the drink.

Crissie popped it, placed it in her mouth, and took a few seconds to tie the cherry stem with her tongue. Reece watched her intently as she took the tied stem out of her mouth and placed it in between them on the counter.

With that, Crissie walked to the end of the counter and started serving the customers there. Reece flicked his eyes between her and the tied cherry stem. Reece was completely dumbstruck at the short conversation the two had just had. Never in his 28 years on Earth had he experienced such a fiery woman.

Reece slowly took a sip of the vibrant cocktail and was pleasantly surprised by the taste. He’d always been more of a Bourbon on the rocks type of guy. Reece keeps his eyes pinned on her as she serves the other clients in the bar. For a moment, he was so entranced by the beauty of her that he completely forgot why he actually came to the bar in the first place.

Crissie wrapped up a conversation with one of the regulars, handing him his old-fashioned, and walked back to Reece, who is now quietly watching her as he drank from the shocking pink highball glass. The view was very comedic. There was a silence between them, both of them just focusing on each other. Nobody could deny the apparent tension and attraction that hung in the air.

“Do I know you? I feel like we’ve met before,” Reece suddenly asked.

Crissie blinked a few times. Her past was a bit checkered, and she hoped that he was mistaken. “I don’t think so,” she answered, “I’m certain you’re not the type of guy someone would forget easily.” She had a coy smile on her lips. “What brings you here today?”

Reece kept staring at her, forgetting to process her question as he tried to place her in his memories.

“I am supposed to start motorcycle lessons today. It’s apparently a massive tourist attraction in this part of town.”

Realization dawned on Crissie and, with it, a sense of disbelief. Reece was her first client for the lessons, and, just as she had feared, he was her only client. Alex had mentioned it a few days ago after he had signed the man up. It must have completely slipped her mind and, after all of her innuendos, it was going to be a long few lessons.